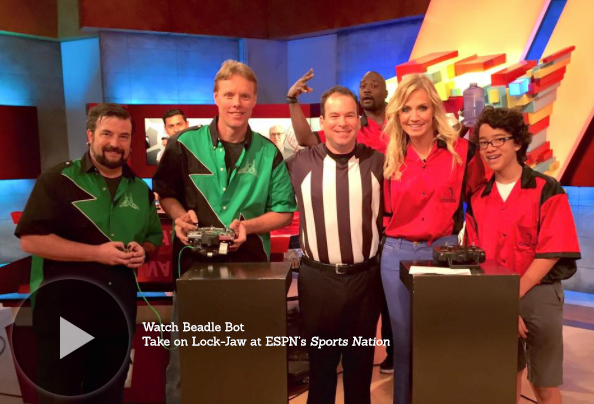 Rolling Robots recently had the honor of building a custom Battlebot for the ESPN show Sports Nation. Our bot was going up against the famous battle-bot Lock-Jaw, and it was bound to be a difficult fight. Even though ultimately we were defeated, it was an awesome experience all around and also an honor to get to compete on national television. Even though our prep-time for the match was limited, our build process helped unearth some really promising designs that we're going to revisit in the future. For the curious robo-battle fans, here's a little journal about our bot-building process: It all started this previous Wednesday afternoon. We had a week to prepare for the match, which was scheduled for the following Thursday. We knew we were going to be on television against a famous battle-bot, so the pressure to succeed started from Day 1.

7-15-2015 6:15PM: Like any good robot design, we started with some hand sketches and then proceeded to translate those into CAD. Josef used Autodesk Inventor to do the basic design. All of the spacings and part dimensions were developed in CAD. Non-critical details, such as the exact positions of the screws etc, were left ambiguous in the interest of time; we only had a week to get this done, so some agile development was definitely in order. Though we definitely ran into a few bumps along the way because of the shortcuts we had to take (we did have a few screw "collisions" in the final build).

7-16-2015 11:30AM: We needed to determine the torque required for our hammer weapon. We did the calculations in a spread sheet and found we were not limited by the torque of the system; rather we had to slow things down to make the hammer speed manageable. With the basic CAD design and torque calculations in hand, we were ready to place orders with VEX Robotics for next day delivery. We had several parts in stock but found ourselves needing some very specific sets of gears and sprockets. We also ordered all of the required nuts, bolts, and other various bits and pieces which would help this robot come together.

7-18-2015 2:00PM: The Robot structure was to be fabricated from Aluminum Channel 3 " x 1" x 1/8" thick. After completing the CAD, we found we needed about 24 feet of this material and suddenly realized we did not have enough metal in our stock, so we took a quick trip to our local metal supplier to get all the structural parts cut to length. Having them cut saved us a lot of time, which was a lifesaver. Pro-tip for competitive robot builders: make yourself a list of nearby parts suppliers that are open on the weekends. :)

7-19-2015 5:25PM: It was time for our first test of the Hammer Weapon concept. It is lifted by a chain driven by a BAG motor with planetary gearbox 500:1. Once it reaches max height we let gravity take over to deliver the smashing blow. So it is basically a lift and drop hammer like a pile driver.

7-20-2015 10:35PM: Here is the full structure of the Bot assembled for display purposes. Not everything is bolted up yet but now we can see how it all fits together. The bot has 3 wheels, two driven by independent BAG motors with 30:1 planetary gearbox and a third omnidirectional wheel up front for support and fast spinning. At this point, we're pretty happy with what we're seeing, but we still need to get that second hammer operational, so fatigued as we were, we soldiered onwards.

7-21-2015 11:15PM: Close to midnight we brought the bot to the Rolling Robots Arena for a full test of its capabilities. We found a few details that needed adjustment but after a little tinkering it was rolling about the arena and undergoing some preliminary testing.

7-22-2015 11:35PM: It's almost midnight the day before the robot is due and we finally get to start our first full test of the bot. It has all the right sounds and performs well in the Rolling Robots Arena. The covers are off because they are back at the paint shop getting detailed. The electronics inside are still not mounted; they are in the white box you see in the picture.

Meeting our opponent. Looks like it might be a quick match. Lock-Jaw is about 200lbs heavier than our bot and sports titanium jaws, not to mention being battle-tested already. Well, maybe we can run... :P

After a fun match we are all friends in the end, that's how robot combat works, destroy each other in the arena and go home friends. The match was more of an exhibition than anything else, so everybody left in good spirits. We made some notes about Lock-Jaw though, and we're already re-designing a bot for our inevitable rematch. Next time it may not get off so easy.